Over the years that I have been building longbows I have always been fascinated with the historical side of the sport and the effectiveness of the English longbow in battle. Some of the claims made of this weapon seemed to be just too good to be true, while others were very believable. Many people have had their own ideas, and many of these ideas have become accepted as “facts,” generally without any actual evidence to back them up.

This began to change when the Mary Rose was raised from the murky waters of the Solent, just outside Portsmouth harbor where she sank in 1545. Amongst the many well-preserved finds on board the ship were hundreds of longbows and thousands of arrows. There was enough material here for a more detailed look at this influential weapon. Much interesting work was done at this time but with the vast amount of material available to the Mary Rose Trust and limited funding, there was much that did not get done at this time, also. One of the first things to come to light was that these bows were, on the whole, a lot bigger than many people had thought. This was not helped by the fact that the two bows, which were recovered from the ship in the 1800s, were at the smaller end of the size range of the bows on the ship.

I became actively involved in studying the war bow when Mark Stretton joined our archery club in 1996. He wanted to shoot this style of equipment. He is a very solidly built man who works with heavy machinery and also does some blacksmithing. In many ways he could well be typical of the sort of man that would have been available to the armies of the period and, therefore, was as likely as anybody would be to be able to match the achievements of these people.

The first bow that I built for him was 70 pounds at 28 inches. It took him six weeks to master it. His second bow was 140 pounds at 32 inches, which took him a little longer to get to grips with. The next bow was a hickory backed osage bow at 160 pounds at 32 inches, and we now began to get some results, as he got better at shooting these bows and I had got better at making them. At the same time I built him some laminated longbows for flight shooting at around 100 pounds at 28 inches. After learning to shoot the big bows he made the flight bows look like training bows. He could shoot them almost effortlessly, a frightening sight for mere mortals like me!

Mark began to forge his own arrowheads and developed the skills to make up his own arrows based on the styles and types of arrows that were typical of the period. It is whilst shooting these arrows that we began to see and understand just how effective a medieval archer could be. However, at the same time it became clear that some of the claims made for our forefathers might have been a little exaggerated and fanciful, while others were very much confirmed.

More recently Mark is shooting a new bow which is hickory backed Oregon yew at 138 pounds at 28 inches. This bow benefits from the information that we have gleaned from the bows that we have seen at the Mary Rose Trust and is a full 80 inches long. Much to our surprise this additional length adds to both the performance of the archer and the bow being smoother and sweeter to draw, yet delivering a powerful performance.

The results so far are interesting though far from complete, but what we can do is give you a taste of what to expect. With the flight bows Mark has shot 334 yards with arrows around 465 grains. With the war bows he has shot around 250 yards with arrows of 800 grains and around 225 yards with arrows of 1,545 grains. This would suggest that distances of 200 yards and more were achievable by our archers with seriously heavy projectiles. Not much of the armor of the day would have been of much use against this sort of arrow. Bearing in mind that the arrows were rarely “clinically clean,” an injury from one might produce a lingering death rather than an instant one.

We are doing a series of ongoing tests with this type of equipment and will let you know what we discover as the results come in. But we are excited about the potential for the future and hope to be able to build a replica war bow in self-yew, kindly supplied by Jim Fetrow in Portland, Oregon. We have some English yew, which may also prove to be of a suitable quality to be able to build a replica, as well. In the future we are hoping that we might be able to get hold of some yew from Italy, where Henry VIII used to get his supplies of staves. If we can get some of this wood, then we should know more certainly just what these bows could do, and a truly accurate set of tests could be done with as near the same materials as the original bows were made of. This project could take some time to complete!

Details of the Equipment

The arrows found on the Mary Rose can tell us a lot about the size of the string nock and, therefore, how big the strings could have been, therefore, what the breaking strain would have been, as we know that they were most likely to have been made of linen. We can see how long the fletchings were and how they were bound on, but not what shape they were. We can see what shape the shafts were, what they were made of, how long they were and how the nocks were reinforced with horn. 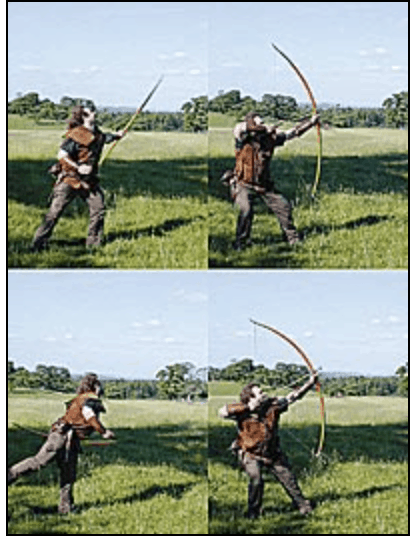 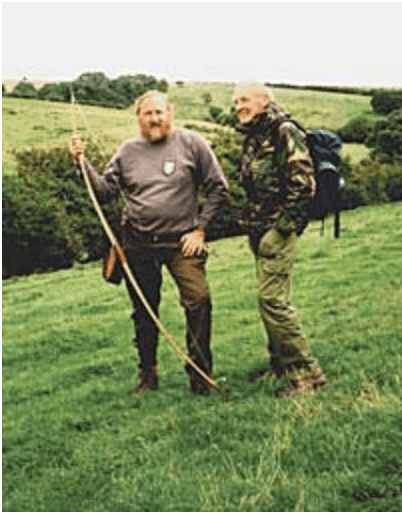 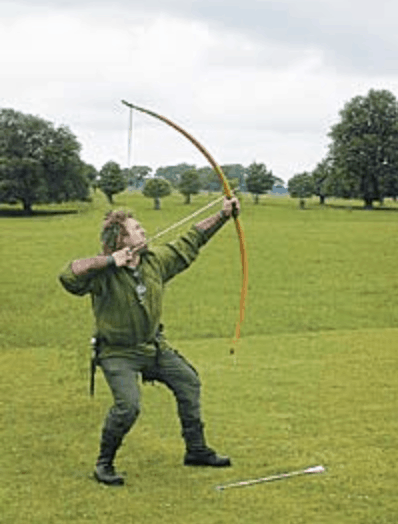 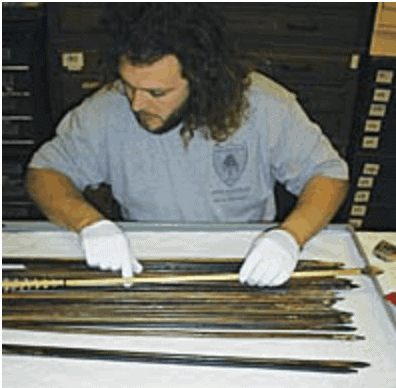 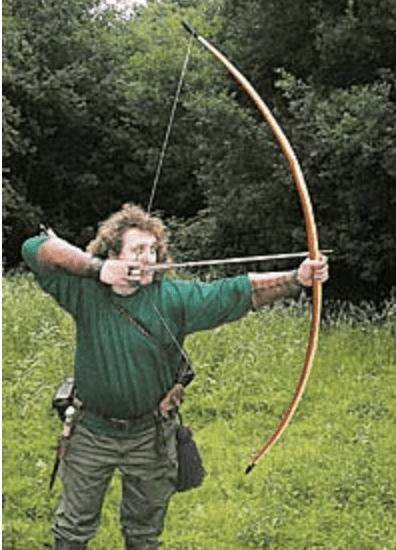 Whilst the arrows did vary in length, the majority were around 30 to 31 1/2 inches, with a smaller number being as short as 27 inches. Clearly there was a reason for this, but we can only guess what it might be. Maybe the shorter arrows were made to be fitted with lighter heads and smaller fletchings to be used at longer ranges, we don’t know as much less is known about how the bow was used in naval warfare than is recorded from land battles.

Many of the arrows were found in sheaves of 24, which were in a leather disc with 1/2 inch holes in it. This means that it is almost certain that they would have had bodkin type heads fitted to them, in order that they could have been inserted and removed from the leather disc as required. These leather discs formed part of a simple quiver with a linen bag on the bottom half, possibly lined with straw to protect and separate the heads and a top half possibly of soft leather to protect the nocks. Many arrows were stored in chests in bundles with leather thongs tying them together these arrows could have been used to reload the “quivers” or may have had heads, which would not have fit into the leather discs. We can only speculate.

There were around 167 bows found in the Mary Rose, some in pieces, some badly bent and damaged, and some, which, after conservation, look like they were made last week. Some of the bows had been braced when the ship went down as they are preserved in the perfect shape of a braced bow. Some were as short as 75 to 76 inches but many were 80 inches and longer. All have clear evidence that they were fitted with horn nocks, which had a string groove on one side only. Some of the bows look like they may have had two string grooves, possibly for use with a stringer? Based on my own experience and opinions I am inclined to agree with other bowyers that the weights of these bows probably ranged from around 80 pounds up to around 180 pounds, with the majority probably falling into the 100-to-120-pound range. Many of the bows had bowyer’s marks on them. Where the arrow would rest, none of the bows that I have looked at, so far, shows any evidence of having been shot. I would have expected that, as yew is very soft, that a bow, which had shot a number of arrows, would have had a definite wear mark where the arrow passed it. All of the replicas that I have made have clear evidence of being shot after only a few arrows. And, as you can still make out fine tooling marks in the bows, you might expect to be able to see such evidence of use, if it is there to be seen.

A number of leather bracers were found, which seem to be of a standard pattern and size, though whilst some were plain others were highly decorated. Interestingly, while items of leather clothing like the bracers and archers’ jerkins were found, there were no finger tabs recovered. In spite of the fact that a lot of rope from the ship was well preserved there were no bowstrings recovered.

There is much work to be done, and the prospect of creating a clearer picture is an exciting one indeed I hope to be able to share it with you as it develops.

About the Author: Primitive Archer Magazine