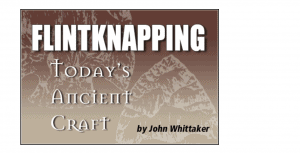 The earliest arrows were tipped with points of flint, and before the bow, there were flint spear points. The earliest spears would have had wooden points, but they were sharpened using cutting edges of flaked stone. Stone is the beginning of technology, and making flaked stone tools, or flintknapping, is the oldest of all crafts preserved in the archaeological record, and part of the heritage of everyone’s ancestors.

Stone tools are very sharp and surprisingly strong, and can do almost anything a metal tool can, but they get dull faster. By the 19th century, stone tools had been made obsolete all over the world, except for a few isolated survivals. Among “civilized” people, flintknapping was mostly a lost art, poorly understood even by archaeologists. Today flintknapping is enjoying a renaissance, not just among archaeologists who study stone tools, but among all sorts of people with interests in primitive skills, artifacts, and prehistory. There are some 70 “knap-ins” around the country every year, where knappers get together to flake stone, exchange materials and tools, and socialize. Flintknapping will not be a lost art again for at least a couple of generations.

The rebirth of the stone age began in the 1800s. The developing field of archaeology began experimenting with prehistoric technologies, and as European colonization threatened to destroy traditional ways of life, anthropologists attempted to record what they could of cultures that were expected to vanish. At the same time, a surprising number of other people began to figure out how stone tools were made, either out of curiosity, or to supply fakes to a growing market in prehistoric antiquities.

By the 1960s, the two streams began to flow together a bit. Don Crabtree is the most famous of several amateur flintknappers who made a contribution to archaeology. Academic, professional, and amateur flintknappers began to get together to share information and solve archaeological problems. Around 1978, the “knap-in” was born out of the era of the “love-in,” “teach-in,” and “be-in.” In recent years, knap-ins have lost most of their archaeological connections, and the non-academic side of knapping has grown enormously, along with the explosion of interest in wilderness crafts and traditional skills in general. Flintknappers in particular have created their own small world, and the knap-ins resemble the tribal encampments of a widely scattered but closely knit clan.

At a modern knap-in, small booths are crowded with up to a couple of hundred people making stone tools, surrounded by fascinated visitors. Flintknapping is a fracture process, where striking or pressing against a stone with a glass-like fracture removes flakes. A crowd of knappers creates a din of sharp cracks as flakes are struck, and the flakes crash, clatter, and jingle as they hit the pile of waste on the tarps. To a knapper’s ear, the sound of flaking is more seductive than a dinner bell. The prehistoric tools still seen at knap-ins include hard, round stone hammers, moose-antler billets and pressure tools made of antler tines. Many modern knappers now prefer similar tools made of copper, but the range of tools and knapping styles used by different people is one of the fascinations of the knap-in. There is no better place to see how many different ways stone tools can be made, and the variation in skill and artistry from beginners to knappers who can now make anything that was made in prehistory or invent imaginative new forms.

There are usually heaps of stone for sale. As in prehistoric times, it is not uncommon to see a knapper working material that traveled miles to be transformed into a sharp-edged tool. Now the trade is global, and obsidian from Oregon or fossil coral from Florida ends up on a tarp in Missouri beside black Brandon flint from England and mookite from Australia. A Paleo-Indian hunter would have known just where in the tribe’s wanderings the best chert was found, as well as where to cut shafts or find game. Among modern knappers, stories about the quest for stone are recited like epics, and secret quarry locations are jealously guarded.

Of course the stone tools themselves are all around at a knap-in. Modern American knappers mostly make pieces everyone knows as “arrowheads,” or “points,” which include tools used prehistorically as knives and lance tips, the points for darts thrown with the aid of an atlatl, and smaller forms that would have actually been hafted to arrows. Many knappers sell their work, often just to support their hobby, but there are a few professionals. The knap-in is one market for points. Some points are sold as replicas to collectors, visitors, and other knappers. The darker side of knapping is that although most knappers sell their points honestly, many points pass through a number of hands and may eventually become faked antiquities.

The best way to avoid the accusation of faking is to sign points and sell them as art, and knappers also like knowing that something they made will be as eternal as a prehistoric arrowhead. As knappers have grown in skill and collectors have developed an appreciation for their work, it is becoming easier to knap as an artist. Many of the points made today are well beyond the ordinary hunting tool of the past, flaked with greater care and attention to symmetry, colorful stone, and well-patterned surfaces. One of the most successful outlets for modern knapped art has been in making stone-bladed knives.

Although some stone tools are indeed beautiful, many outsiders marvel that a knapper will sit contentedly flaking in the sun all day, ignoring sweat, insects, and cut fingers, or drive hundreds of miles a year to reach knap-ins, or struggle through thickets bent double under a vertebra-crushing load of rocks to obtain choice flint. What is it that drives us to such madness?

Knapping has a mystical lure. The finished point may be beautiful or clunky, but even the process of knapping is magical. Each flake prepares the way for the next or creates a problem that must be overcome, and a fine piece is plotted as carefully as a grandmaster’s chess game. Every flake requires a cunning knowledge of the ways of the stone and a deft stroke of the trained hand. As you succeed, you reveal the secrets of the piece of stone, creating new surfaces that did not exist before, discovering colors and crystals. Intense concentration on an absorbing craft takes you out of our annoying, crowded world, and stone tools connect you with the ancestors of all humans. They are deadly weapons, hand-forged tools, jewel-like art reflecting the partly mythical past when individuality and skillful work were the rule, before machines, politicians, and the babble of TVs.

Knapping can even be dramatic to watch. A slip, a moment’s inattention, and an ugly flaw is left on your point, or with a loud snap, an hour’s work is shattered, and the knapper drops it in the dust with a muttered curse and a wry smile: “It’s just a rock!” One of the most distinctive features of knap-ins is that they are not just artifact shows. The whole point is in the action, the knapping. Of course this is a chance for some to demonstrate their skill, others to learn by watching or being coached. But the visible knapping is not even as important to most knappers as the chance to knap among other knappers, the handful of people in all the world who really understand what compels you to break sharp rocks with a bit of antler.

It is this tribal society that unites knappers through a shared passion. Stone tools, however beautiful and fascinating, are not a really necessary part of the modern world. However, there is a great satisfaction in making things well, and in using something you made yourself. Many a hunter has learned to his surprise that stone tools are every bit as good as steel when cutting up an animal. The archer or atlatlist who appreciates the deadly power of a sharp, symmetrical edge can find in stone points a greater understanding of “how our ancestors did it,” or the pleasure of learning knapping as one more ancient skill to stand beside tillering, fletching, and the other crafts of the bowyer.

About the Author: Primitive Archer Magazine